skip to main | skip to sidebar

New York City - Most of you know, I've been a San Diego Chargers fanatic for 32 years now. Rough times mostly, but here we are, yet again. Playoff time and the Chargers are in the mix, as has been the case the last few years.

A good number of early season predictions had The Chargers meeting the Cowboys in this year's Super Bowl. Prior to the 2009 season, the "Football Outsid 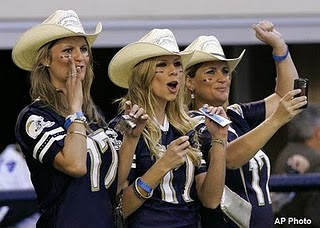 ers Almanac", considered by many to be the benchmark of football predictors, said of San Diego... "The San Diego Chargers are the prohibitive favorites to win Super Bowl XLIV. Our 2009 statistical projection for the Chargers is so off the charts that it may endanger the boundaries of reality." They also picked the Cowboys to be the Chargers opponent in XLIV.

The Chargers have done their part and are considered by many to be the hottest and strongest team heading into the playoffs in either conference. In the NFC, the Cowboys appear to be primed for a playoff run that gets them beyond the first game, for the first time, in a looong time. However, listening to the multitude of Cowboy fans that have come out of the closet for the first time all season, you'd think the Cowboys had done well in the playoffs the last few years. LOL

I've been holding my tongue more than usual this season because, well... first the Bolts had that slow start and then I realized something different is happening this year. Something special. It's a number of things... some of which, I've mentioned a few times in my emails with some of you. Most surprising to me though, is how the team's depth has shined, through numerous major injuries this season. We've played 99% of our games without our all-pro anchors, Jamal Williams(NT), and Nick Hardwick(C) in the trenches. Numerous injuries to other linemen and all-pro linebackers have also been abound all season long. LT was absent for 4 games. Vincent Jackson and Eric Weddle have been battling serious knee and hip injuries the last few weeks. I don't care what anyone says, to beat a starting team with a decent defense, like the Redskins, with your 2nd and 3rd string players, is pretty impressive. There's something going on here.

Everything seems to be in place for San Diego this time around. This year, for a change, the PATS get the major injuries to their top scorers heading into the playoffs. The Colts rested players when they probably shouldn't have. They need to stay on a roll more than SD. Especially considering how River's and company owns them in the playoffs. The Chargers have already seen the Bengals and handled them handedly. The "little JETS that could" are around for a laugh, and over in the NFC, a former Charger defensive coordinator seems to finally have his team primed to make a run for the Superbowl. I'm hoping he does now. Previously, I've said that it would be nice to see Rivers go up against Brees in an XLIV showdown. I also wouldn't mind an Aaron Rodgers or McNabb battle. The Cowboys though? America's team? Jerry "the next Al Davis" Jones' team? A bigger international audience? The team we manhandled in week 14? Yes, that's right.... I'm talking to you Marion Barber! A win over the Cowboys in the Superbowl would be the cherry on top of the storied franchise's now, 50 years in existence. It would wipe out the San Diego Sports Curse ( http://en.wikipedia.org/wiki/San_Diego_sports_curse ) , help Charger fans forget the 1993 Superbowl disaster against the 49ers, and amongst other things shut up Cowboy fans for a few more months.

Here is a link to Darbe's blog: The Goat Check
Posted by NYC Chargers Fans at 12:40 PM